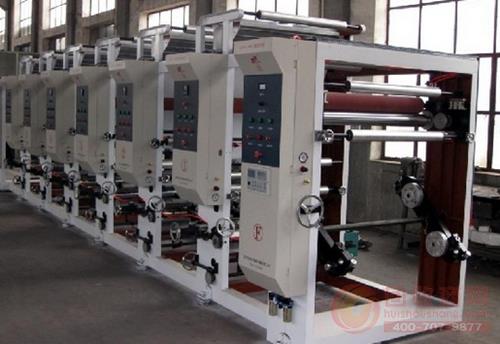 In plastic printing, high-speed rotogravure often suffers from dirty problems. The phenomenon is that the non-printing surface of the roller is also stained with a layer of resin (pigmented in the resin) and transferred to the substrate for printing. The object is smeared or smeared as a serious linear stain.
The reasons are as follows:
1. The resin has an affinity for the chrome surface of the drum.
2. The system composed of the resin and the organic solvent is in a supersaturated state, and a large amount of resin is precipitated and is not dissolved by the solvent.
3. The ink has a strong wettability to the chrome surface, or the solvent used in the ink is a slow drying solvent.
4. The scraper is worn or poorly ground.
5. The scraper angle is wrong.
6. The surface condition of the drum is poor (such as plate damage, chrome plating, etc.).
Due to the precipitation of a large amount of resin and the affinity of the resin to the drum, the resin is tightly cut on the drum under the blade pressure, which is the most important cause of the dirty plate. We know that the solvent has the ability to dissolve the resin or additives and additives, so that the pigment and the resin are easily dispersed, the degree of association is lowered, and the drum is attached. Therefore, we only need to make the colloidal system composed of resin, pigment and organic solvent not supersaturated, the resin does not precipitate out, and does not coalesce together, but a uniform and dispersed colloidal system, so that the pigment and resin in the ink have Good dispersion and fluidity. The affinity of the resin to the roller is not apparent, and the dirty plate phenomenon can be substantially avoided. Therefore, in addition to considering the strength of solvent dissolution, we must also pay attention to the problem of ink maturity.
For the first three reasons, we can use the following measures to solve the dirty version.
1. Use a solvent with strong solubility and volatilization. For example, the following solvent formula can be used:
Toluene: ethyl acetate = 1: 1 or toluene: ethyl acetate: butanone = 4: 3: 3
The ratio is the volume ratio, which can be appropriately changed according to the production conditions and other quality requirements. Sometimes it is necessary to add an appropriate amount of isopropyl alcohol to enhance gloss and give better leveling.
2. Control the viscosity of the ink. According to our practical experience, such as the use of the Zahn 3 cup to measure, generally between 12s and 16s, the resin is dissolved more fully and evenly dispersed, that is, the ink can be in an ideal state. In the production process, we need to use the lean controller or artificially replenish the solvent according to the loss of various solvents to maintain the stability of the viscosity to ensure the ideal state of the ink.
3. We can use a slightly harder blade, soft blade to scrape the ink is not ideal, hard blade is easy to damage the roller, or the distance between the scraper blade and the hard piece is shorter (generally between 3mm ~ 5mm) . And use oil stone to blunt, smooth the blade, and then use the metallographic 2# sandpaper to polish.
4. The angle of the doctor blade should be at a relatively ideal angle (contact angle is between 50 Â° and 70 Â°).
5. The drum is generally required to be ground with metallographic 2# sandpaper before printing. If the roller is seriously damaged, it should be rechromed.
In short, do the above 5 points, the dirty version can be solved.

DM products are direct silicone coated polyethylene (PE), polypropylene (PP), polyester (PET), and polystyrene (PS) films with either one or two-sided release options. In addition to standard one and two-sided silicone coatings, we offer very stable one and two-sided siliconized liner with the option to use solvent-based or solventless chemistries. This product line is ideal for certain uses in the medical, industrial, and composites industries.